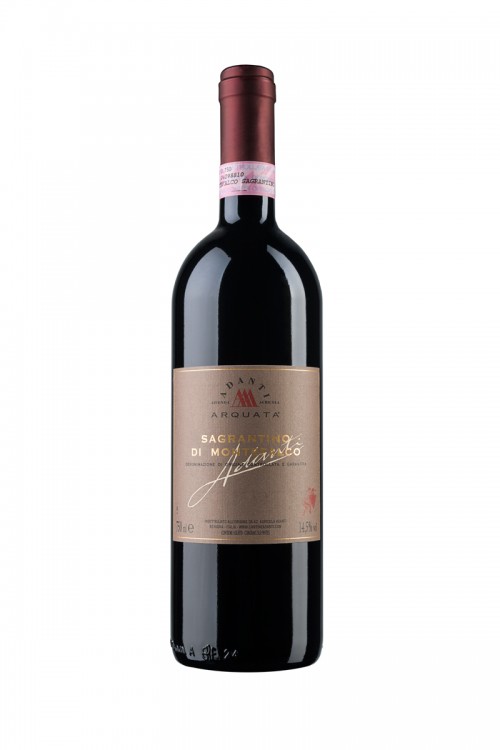 The origins of Sagrantino are still debated, but one theory considers that it was introduced in Umbria by Franciscan monks on their way back from Asia Minor.
Sagrantino is a native grape variety : it was originally sweet and its name derives from “sagra” because it was mainly used during religious celebration and holidays.
It was thanks to the dry experiments done in 1970′s by few and tenacious producers, led by Adanti family, which determined the triumphal return of Sagrantino grape. After many efforts, because of the organoleptic nature of the vineyard, there was a radically change, from a sweet wine into a dry, robust and impressive one.
In 1992 Sagrantino gained the DOCG certification.
Sagrantino has deep purple color when it’s young and tending to garnet with ageing. When it’s mature it has an intense fruity and spicy bouquet, with notes of blackberry and plum, as well as ample tannins and a licorice aftertaste.

Most dry Sagrantino are best consumed between five to ten years after release. Sagrantino is aged for a significant amount of time and only after some years you can appreciate it fully.

In their production the Adanti winery used only barrels and tonneaux and it prefers a longer ageing in bottle compared with disciplinary’s regulation. Sagrantino grapes can be compared with Aglianico for its polyphenolic richness.

For its structure, longevity and tannic richness, you can compare Sagrantino to Barolo and Brunello.
Pairing Sagrantino with red meat roasts, veal, pigeon either grilled or spit, barbecues. It is a good match also with aged cheese.

Sagrantino Passito is excellent with pastry and pies with berries, dark chocolate, but also with roasted lamb and seasoned Pecorino cheese, as suggested from our Easter traditional lunch.

This website uses cookies to improve your experience while you navigate through the website. Out of these, the cookies that are categorized as necessary are stored on your browser as they are essential for the working of basic functionalities of the website. We also use third-party cookies that help us analyze and understand how you use this website. These cookies will be stored in your browser only with your consent. You also have the option to opt-out of these cookies. But opting out of some of these cookies may affect your browsing experience.
Necessary Sempre abilitato

Any cookies that may not be particularly necessary for the website to function and is used specifically to collect user personal data via analytics, ads, other embedded contents are termed as non-necessary cookies. It is mandatory to procure user consent prior to running these cookies on your website.